Thomas Jefferson (Shadwell 1743– Monticello 1826) was a revolutionist, statesman, philosopher, lawyer, musician, architect, writer and translator. A complex and brilliant man, who was also full of contradictions, Jefferson would become one of the most accomplished American presidents. Although much of his work was published anonymously, often for reputational reasons, he spent a lifetime engaging with Enlightenment ideas and was responsible for translating several important works of freethinking and political economy.

While Thomas Jefferson is best known for his writing, it is less well known that he also translated, partly because many of these translations appeared anonymously. Most would probably agree that his enduring contribution to the radical debates of the eighteenth century was his drafting of the American Declaration of Independence (4 July 1776). The principles he so eloquently invoked in the second paragraph of his Declaration, “that all men are created equal; that they are endowed by their creator with inherent and inalienable rights; that among these are life, liberty, and the pursuit of happiness, effectively paraphrased well-established liberal principles of happiness as the foundation of liberty in order to conjure into existence an American 'people', who could now determine their own political destiny according to the axioms of social contract theory.[i] Thirteen years later, these resonant phrases would find a new lease of life in the preamble to France’s own Déclaration des droits de l’Homme et du Citoyen (August 1789), thanks to his regular conversations with the marquis de La Fayette, amongst others, during his time as America’s minister to France (1785-89).[ii] 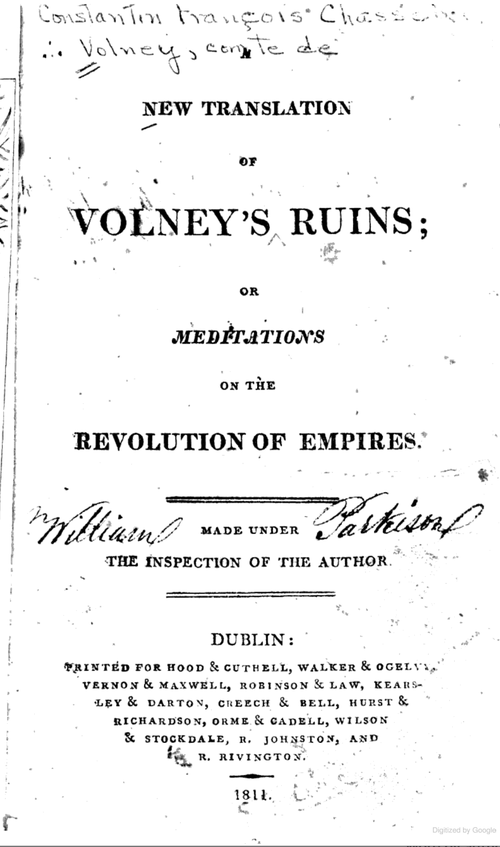 Born in Albemarle County, Virginia, Thomas was the oldest son of Peter Jefferson, a prominent local dignitary with large holdings of land and slaves. A gifted polymath, Jefferson graduated from the William and Mary College in Williamsburg, the provincial capital, and went on to study law. Jefferson’s position in the county oligarchy secured him election to the Virginia House of Burgesses and his political career took off quickly after the growing crisis over the future of British imperial rule in the American provinces gave him the opportunity to display his talents as a polemicist and statesman, transforming the county gentleman into a radical revolutionary. His cosmopolitan outlook gave him an idealized, patriotic vision of government grounded on the ancient, English common-law tradition with its imposition of constitutional constraints on monarchical authority.

The only skill he lacked was the power of oratory, so instead he deployed his acute understanding of the various strains of Enlightenment thought to analyse the political and historical situation for his fellow countrymen. Recognized as a diligent worker, he was soon appointed to key committees and charged with justifying the province’s opposition to imperial policy, converting the corporate claims of Virginia's ruling élite into the more cosmopolitan language of universal natural rights in his Summary View of the Rights of British America (1774). Although this controversial pamphlet was published anonymously, his authorship was soon widely known, and led to his election to the second Continental Congress in 1775.

However, while Jefferson is known for his Act for Establishing Religious Freedom (drafted in 1777), The Virginia Declaration of Rights (12 June 1776) and Declaration of Independence, far less attention has been paid to his covert or anonymous work as a translator. While the last two were translated into French and Italian, he also participated in translating the works of others he considered equally important, thus fostering important social networks that enabled new ideas around republican government, free thinking and political economy to circulate in both directions across the Atlantic. Jefferson had strong ideas about translation too.

For example, he was so unhappy with the abridged translation of his Notes on the State of Virginia (1785) – a considered response to queries from the French legation seeking comprehensive information on the institutions and resources of the American union – that he considered the resulting Observations sur la Virginie (1786) “a blotch of errors from beginning to end”, and refused to use the translator, André Morellet, again. After censors rejected the inclusion of his statement on freedom of conscience and the principle of the separation of church and state in the French edition, he had copies translated into French and Italian and widely distributed to the press, the courts of Europe, and inserted into the Encyclopédie méthodique (1784-86). He would later view it as one of the three great achievements of his life alongside the Declaration of Independence and his founding of the University of Virginia.[iii]

Following Jefferson’s appointment in 1784 to succeed Benjamin Franklin as America’s new representative in France, he used his stay in Paris to pursue his intellectual interests and cultivate important friendships within the Enlightenment 'Republic of Letters'. He met many of these at Madame Helvétius’s reputed salon, including abbé Morellet, the comte de Mirabeau, the marquis de Condorcet, Constantin-François de Chasseboeuf (the future comte de Volney), Pierre-Samuel Dupont de Nemours and Antoine-Louis-Claude Destutt de Tracy (future leader of the group of political economists known as the Idéologues) whose work Jefferson would later translate. Jefferson witnessed the opening phases of the French Revolution, which he viewed as a tribute to the achievement of America’s War of Independence. 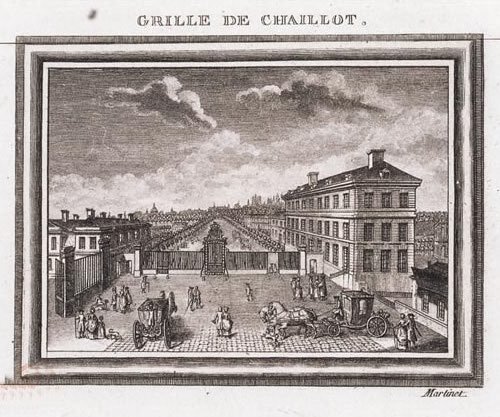 It was during his stay in Paris that Jefferson attempted his first (unfinished and unpublished) translation of Condorcet’s only work devoted to the cause of abolitionism, Réflexions sur l’esclavage des nègres (1788), published under the pseudonym of Joachim Schwarz. The Library of Congress holds the incomplete manuscript which is available to view online. He later prepared (unpublished) notes for a translation of Condorcet’s posthumously published Esquisse d’un tableau historique des progrès de l’esprit humain (1795). Jefferson also arranged, in collaboration with Filippo Mazzei, a translation of John Stevens’s Observations on Government (1787), which critiqued the idealized view of the English constitution and its bicameral legislative system, proposed by John Adams. It appeared as Examen du gouvernement d'Angleterre, comparé aux constitutions des États-Unis (1789), along with extensive notes and commentary by the French ‘Américanistes’, Condorcet, Pierre-Samuel Dupont de Nemours, Jean-Antoine Gallois, Filippo Mazzei and Scipione Piattoli.[iv]

Jefferson sailed from France in October 1789 to sort out his tangled financial affairs in Virginia. These debts to British merchants, which Jefferson had inherited from his wealthy father-in-law, became a burden that would influence his lifelong interest in public finance and the continuing threat posed by British economic power to American independence. Jefferson had intended to return to his post in Paris but accepted instead an invitation from George Washington to join the new president's cabinet as secretary of state in March 1790, where he played a key role in formulating America’s foreign policy.

After losing to John Adams in the presidential election of 1797, Jefferson became his vice-President, and it was during this time that he began work on a translation of Volney’s freethinking, visionary polemic, Les ruines ou Méditation sur les révolutions des empires (1791), which was published as New Translation of Volney’s Ruins or a survey of the Revolutions of Empires (1802). Volney initiated this project during his trip to America in 1795-98, unhappy with the quality of the original 1792 translation by William Godwin’s amanuensis, James Marshall. Jefferson translated the invocation and first 20 chapters, while the radical poet Joel Barlow took responsibility for the rest and had it published in Paris by his friend, John Hurford Stone, founder of the English Press, who was also responsible for its dissemination in the US. Jefferson’s name was omitted at his request, fearing that his involvement in this skeptical text might be used against him by political opponents who had already attacked his religious views and demonized Thomas Paine likewise for Age of Reason (1794). It became the standard translation in the Anglophone world, joining a number of Italian translations as a vehicle for spreading Volney’s universalist vision of a transnational public sphere around the world, in particular the notion that the very existence of “kings, nobles and priests” – a favourite trilogism of Jefferson’s own radical lexicon – conspired against human happiness. Its influence impacted, amongst others, on the thought of Mary Shelley, Abraham Lincoln and Walt Whitman.[v]

Following the end of his presidency, Jefferson retired to his mountain top home Monticello in 1809, but did not lose his intellectual edge. On the contrary, his reflections on political and constitutional theory gave him the opportunity to reaffirm his commitment to the fundamental principles that had guided him throughout his career. While he never left Virginia again, he kept up a long-distance correspondence with Destutt de Tracy. One result of this collaboration was his careful revision of the translation of Destutt de Tracy’s anonymously published Commentaire sur l’Esprit des Lois de Montesquieu (1819) as A Commentary and Review of Montesquieu’s Spirit of Laws (1811), which included Jefferson’s preface and further observations by Condorcet and Helvétius. It was published first in America at a time when a French edition was impossible under Napoleonic censorship. Jefferson also introduced and translated volume 4 of Destutt de Tracy’s Eléments d’Idéologie (1801-15), as A Treatise on Political Economy (1817). Both works were also translated into Italian, and, according to Franco Venturi, exerted a considerable influence on the later revolutionary groups of the 1820s, including the Italian Carbonari and Russian Decembrists. By the time of his death at the age of eighty-three in 1826, the fiftieth anniversary of American independence, Jefferson had become an American icon.[vi] But at the same time in the world of translation, he played a lesser known but equally important role as a conduit for key Enlightenment ideas across the Atlantic.